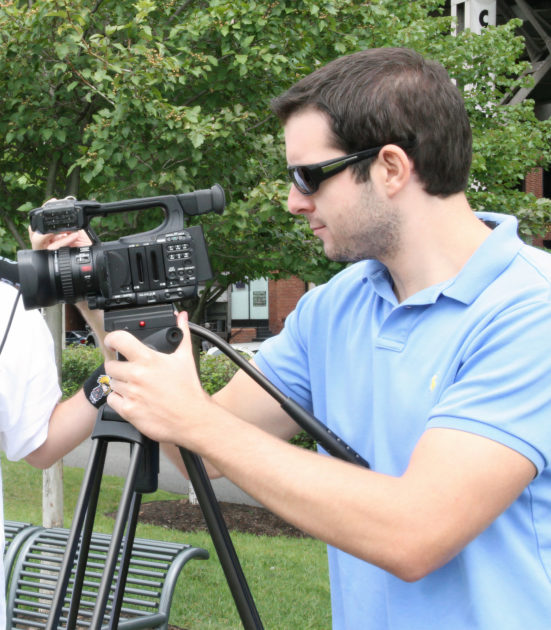 Mike Bedont is our Production Coordinator and he’s been serving as Saylor Academy’s very own multimedia expert for almost a decade. He gave us an insight into what his role entails, what a regular workday looks like for him, as well as what he enjoys doing outside of work. Read his story below.

SA: Tell us about your work. What do you do at Saylor Academy?

M: I’m the video producer. It’s a wide-ranging thing, it’s changed over the years. Whatever sort of multimedia thing we need to be done, I’m the one who does it. Whether it’s working with third-party people to get to the content they’ve made or if it’s making our own content. Now especially in the pandemic, we have a lot of live streams. But it used to be taking a camera to schools and finding professors to record themselves, to coach them through it. It’s evolved a lot over the years. But if there’s a video on the site, I probably had to do something with it.

SA: What does a typical workday look like for you?

M: Well, there are no typical workdays. It usually rolls in phases. Usually, there’s a project, a day where something happens. For example, there’s a day where there’s a live stream. Back when we used to be able to go places, there’d be a day that was going to be a shoot, you know. The beginning of the week is about wrapping up the last week. The tip of the day is about checking my Slack, checking my emails, then checking my notes to see what projects I’m working on, and what’s coming up.

SA: What do you like the most about your job?

M: I’m a big fan of getting people to access education, and I think that videos can be key components in that because a lot of text can be dry. So anytime we can try and get a human voice or a human face involved, I feel like that is something that can really help the students stay engaged.

SA: What are your hopes for the future of Saylor Academy?

M: My hope for the future is continual growth. I see it year over year in the numbers, when I look at the YouTube analytics and they’re getting bigger. You just want to get to a point where, at least on an institutional level, you go and talk to people who work in the higher ed space and you can hear: “Oh, yeah, we’ve heard of you [Saylor Academy]. We’re using your resources in some of our courses.”

SA: What do you like to do when you’re not working?

M: I am obsessed with my Fitbit and my steps. So especially now that we’re in the summer. I like going out, walking around and just listen to music or a book on tape. I like to walk. contemplate things. That’s a big thing I do especially now with the weather so nice, you know. Other than that, obviously as a video producer, I love movies and TV. Before the pandemic, I would probably go see a movie like every week. So hopefully I get to get back to doing that when they start putting anything good out.

SA: Do you have a favorite line from a movie?

M: There’s a bunch. We’ll go with Marlon Brando and On The Waterfront. “I could’ve been a contender. I could’ve been somebody, instead of a bum, which is what I am.”

SA: What would you do if you won the lottery?

M: I thought about this before. I definitely still want to do video production stuff, because then I’d have a budget to do it. I would start a production company, and try and make some stuff of my own. Then maybe have a charitable wing of the production company that produces videos for other nonprofits.