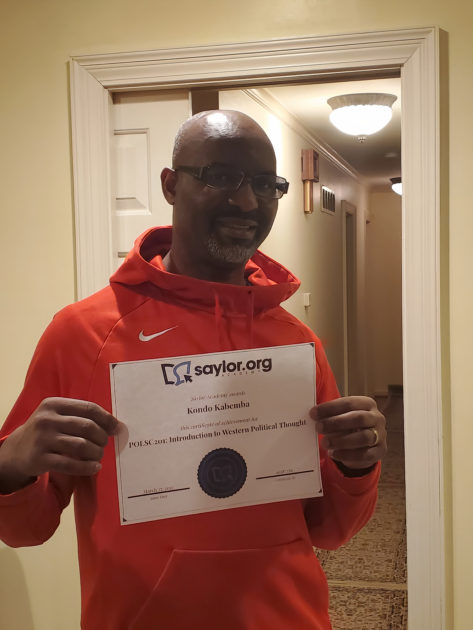 Benito Kabemba set off to earn his degree like most college students do, with a prospect of a better life in mind and the desire to prosper in his country. Unbeknown to him, the future had other plans for him in store when in 2001, brewing political conflict in his home country forced him to flee and find refuge in South Africa. Even when standing in the eye of the storm, Benito didn’t give up on his dream to pursue education, and over two decades after he dropped out of school, he’s now studying at Excelsior College, one of our Degree Completion Partners. Read Benito’s story below.

“I am from the Democratic Republic of Congo, and while I was doing my second year at the university, my country was invaded by neighboring countries from 1998 to 2003.”

Benito’s journey led him to South Africa, where his first challenge became apparent. “My question was, how will I go back to school without English since I knew only French?”

In 2013 Benito found Saylor Academy. By then, he was looking for ways to go back to school, and Saylor became his pathway to continue his education.

“I went ahead and explored the catalog, which was amazing; so many courses that I could take without a fee.”

Enthralled by the idea of free and quality education, Benito still had one concern left; the language barrier. With French being his native language, Benito understood that completing our courses would require a great effort. That, however, didn’t stop him.

“It took me years to be able to understand the content of the courses because English was still a problem. I decided to begin reading without enrolling because the material was of a high standard.”

Benito was determined to achieve his goals and sourced his confidence from many places, including social media. “Jeff Davidson was the man who gave me courage through Facebook. He would send encouraging messages stating that no matter what, never give up, you can make it.”

Eventually, Benito’s original desire to earn a degree turned into a reality when he made one determinating change to his life. “Five years later, I immigrated to the United States, where I live now in Lexington, Kentucky. I realized that I should enroll in courses, and I learned about the credits program, and that’s how with some credits earned from Saylor, I got into a degree program at Excelsior College.”

Although his path was difficult, Benito is now on his way to attaining his goals, and we are proud to have him as part of our group of Saylor graduates that never fail to teach us the value of perseverance.

“Saylor gave me the foundation of what college is about, and I am so glad to have come across the website that I will highly recommend to anybody trying to go back to college for career advancement or other purposes.”

If you are looking to finish your college degree, click here to learn more about our Direct College Credit Program where you can complete your degree with substantial tuition savings!  Read more student interviews here and learn about their experiences earning their certificates.